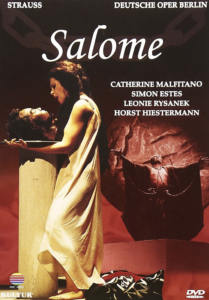 During a banquet, Jochanaan (John the Baptist) proclaims, from his prison cell, the coming of the Messiah. He is brought for Salome to see and she, fascinated by him, makes an advance, which he shuns, urging her not to follow the ways of her mother, Herodias. When Jochanaan is taken back to his cell, Herod asks Salome to dance, and she agrees on condition that she will be granted a wish.

After her Dance of the Seven Veils, she demands the head of Jochanaan, which Herod is forced to have brought to her. She fondles and kisses it until the revolted Herod orders his soldiers to crush her with their shields.