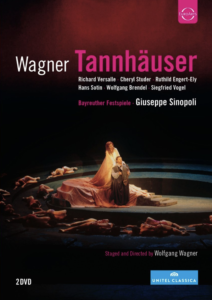 “Thunderous applause, elation”, wrote the prestigious Germany daily Frankfurter Allgemeine Zeitung, and Rome’s La Repubblica noted the
“triumphal success and storm of applause” that greeted Giuseppe Sinopoli and the ensemble at Tannhäuser’s 1989 Bayreuth Festival premiere. Directed by Wolfgang Wagner, Richard Wagner’s grandson, this Tannhäuser production was one of the high points of the Bayreuth Festival during the latter part of the 1980s. The abstract starkness of Wolfgang Wagner’s production is underscored by the crystalline clarity and vigor of Giuseppe Sinopoli’s conducting, which particularly highlights the progressive aspects of the score.

This Tannhäuser production gathers together some of the great Wagner singers of our time such as Cheryl Studer (Elizabeth), Wolfgang Brendel (Wolfram), Richard Versalle (Tannhäuser) and Hans Sotin (Landgrave). 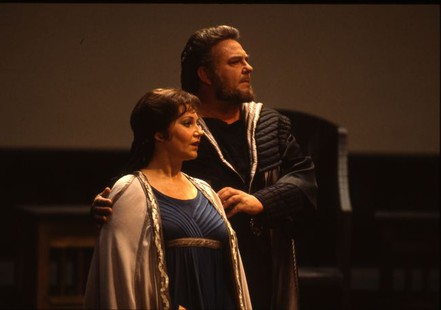